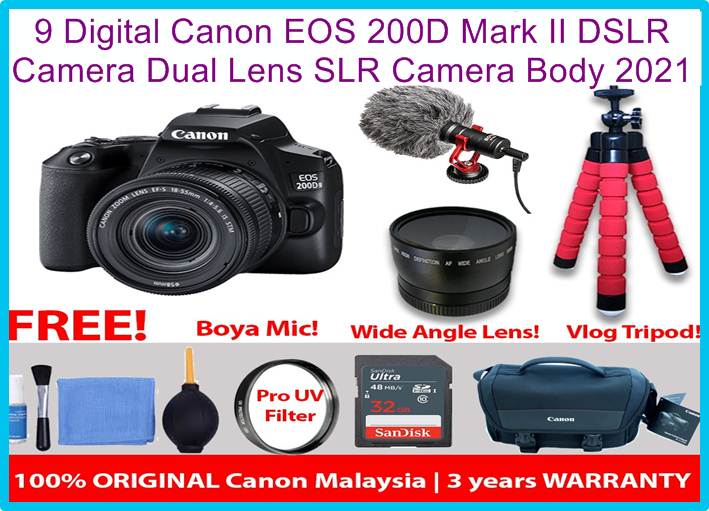 EOS 200D II is Canon’s lightest DSLR with a Vari-angle Touch Screen LCD. Weighing only a little heavier than a bottle of water*, the camera slides right into your bag for that everyday photography. Packed into its petite body is Canon’s 24.1megapixel APS-C CMOS sensor, DIGIC 8 processor and a bunch of features that would make snapping your everyday life seamlessly easier.

First time incorporated into an EOS DSLR, Creative Assist and smooth skin feature would allow you to achieve desired effects on your photos and easily take picture perfect selfies. Stay connected to the camera with the Low energy Bluetooth connection and send images to your mobile devices as you shoot for ease of sharing.

The EOS 200D II is designed for comfort with its deep grip and ergonomically laid out function dials. With Black, Silver and White to choose from, it is sure to adds a statement to your lifestyle.

Branded the smallest DSLR in Canon’s EOS lineup, the EOS 200D , successor to the EOS 100D released in 2013, packs in technologies that have become a mainstay on Canon’s latest EOS cameras, such as Dual Pixel CMOS AF and the DIGIC 7 image processor. In this article, we take a closer look at four of such features. (Reported by: Kazuo Nakahara)

With a vari-angle monitor and Wi-Fi connectivity, the EOS 200D is a tempting entry-level camera

In a world where entry-level DSLR cameras tend to be replaced by newer models within the short span of 1 to 2 years, the EOS 100D stood out for its over four-year long reign as one of the most popular entry-level models since its release in April 2013. The baton has now been passed to its successor, the EOS 200D, which follows in its predecessor’s tracks as a DSLR camera that incorporates imaging potential almost akin to that of a mid-range camera, even within a compact, lightweight body.

The CMOS image sensor on the EOS 200D boasts 24.2 megapixels, a large increase from the 18.0 megapixels on the EOS 100D. AF  during Live View shooting promises to be much faster than before with the use of Dual Pixel CMOS AF, and enhancements to movie-shooting features increase the EOS 200D’s appeal as a video shooter. The camera’s image processor, the ‘brains’ behind its operations, uses Canon’s latest DIGIC 7 system, ensuring even more powerful processing abilities.

In terms of wireless communication, the EOS 200D supports Wi-Fi, NFC and Bluetooth. The latter, in particular, provides a constant connection between camera and smartphone, such that one can use a smartphone to start-up the camera and transfer pictures even when the camera is powered off, a feature that aptly takes into consideration the shooting style of new, entry-level users.

The Vari-angle rear LCD monitor provides a great degree of versatility when shooting, and the touchscreen ability also is a wonderful match with Dual Pixel CMOS AF. For viewfinder shooting, the coverage of the optical viewfinder and AF points follow from the EOS 100D, but continuous shooting speed has been increased to 5 fps.

Below, we take a closer look at 4 key features of this camera.

Vari-angle, 2 options for screen display
The EOS 200D features a Vari-angle LCD monitor, which greatly increases the variety of scenes that you can shoot. Unlike on a tilt-type screen, Vari-angle enables you to take high- and low-angle shots regardless of whether you are holding the camera in horizontal or vertical orientation. Self-portraits are also a given. The default menu display setting is the “Guided” mode, which provides a beginner-friendly, easy-to-understand user interface. New users can familiarize themselves with camera operations using the graphics-based guide and explanations.

The ‘Guided’ mode (friendly display) is the default screen display setting. It can be switched to the ‘Standard’ display mode.

Dual Pixel CMOS AF
The EOS 200D is equipped with the Dual Pixel CMOS AF  system, where each pixel on the image sensor is capable of two functions—capturing light for imaging purposes, and carrying out image plane phase difference detection AF . This enables high-speed, seamless phase-difference detection AF during Live View shooting, over an area that covers 80% (horizontally and vertically) of the LCD screen. As a result, on the EOS 200D, AF during Live View shooting is as fast as it is on a mid-to-high-end DSLR.

Even with Touch AF, AF is still available over 80% (horizontally and vertically) of the screen.

Improvements to image quality with DIGIC 7

Constant connection with a smartphone, even when powered off
Bluetooth low energy technology enables a constant, low-powered connection to be maintained between the camera and a smartphone, even when powered off. This means that should you need to transfer photos, you do not even need to touch your camera. All you need to do is to initiate the action via the Camera Connect smartphone app (downloadable for free), and the connection will automatically switch from Bluetooth to Wi-Fi to facilitate the transfer.

Connection through both Wi-Fi and Bluetooth is possible with a smartphone or compatible remote control device. On the EOS 200D, you can choose to enable/disable the Bluetooth connection when the camera is powered off.

The smallest and lightest Canon DSLR so far, the 200D Mark II has a DIGIC 8 processor, support for 4K/25p video recording, and Dual Pixel autofocusing in Live View mode. The 200D Mark II is targeted at novice photographers who want something better than their smartphones for taking pictures.

What is the price of Canon EOS 200D Mark II?

Is Canon 200D worth buying? In summary

The sensor and DIGIC 7 processor in the EOS 200D is the same as in the EOS 77D but they’re packed into a more compact and lighter body that is a better option for smartphone photographers looking to step up to a more capable camera.

Is Canon 200D good for beginners?

The Canon EOS 200D is an interesting small-scale DSLR, designed for beginners, yet comprehensive enough for photo enthusiasts too. It arrives at a time when mirrorless models – such as Canon’s own EOS M6 – are arguably the more prolific cameras to buy, thanks to speedy screen-based or viewfinder-based autofocus